Dr Karl outlines what we do and don’t know about the mysteriously named dark energy, which makes up around 70 per cent of the entire universe. 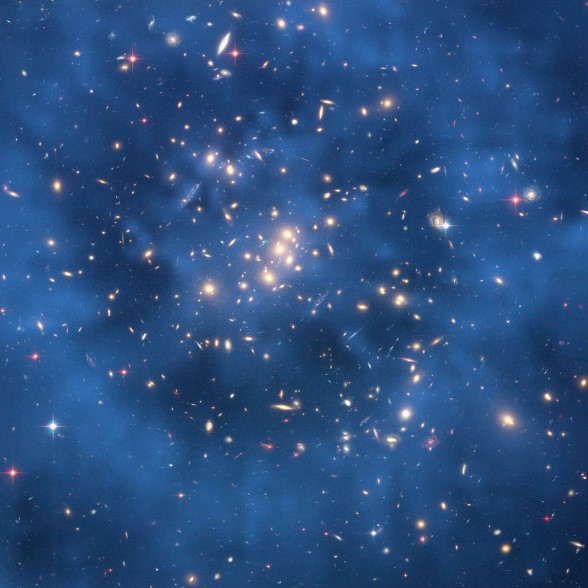 Dark energy makes up about 70 percent of the universe, and another 25 per cent is made up of dark matter. IMAGE CREDIT: NASA, ESA, M. J. Jee and H. Ford et al. (Johns Hopkins Univ.)

THE LATEST AUSTRALIAN discovery that impresses the heck out of me is really, really weird. We can’t see it or touch it – and yet, it makes up about 70 per cent of the entire universe.

It’s called dark energy. Aussie physicist Professor Brian Schmidt discovered it with two other people. They were awarded the 2011 Nobel Prize for their efforts.

First, an overview. About 5 per cent of the universe is made up of atoms (‘regular’ matter). Atoms make up everything we can see – you, our planet and the stars. An atom is similar to a Solar System in structure: it has a central nucleus (the Sun) with electrons (the planets) orbiting that nucleus.

Another 25 per cent of the universe is made up of dark matter. We have never seen or touched it directly. We have no idea what it’s made of. But we are very confident that it exists, because dark matter (whatever it is) has gravity. We have mapped the location of dark matter by its gravitational effects.

Finally, there’s dark energy, which makes up about 70 per cent of the universe. It seems to be evenly spread throughout. What we have discovered about dark energy is that it ‘pushes’, as in it repels outwards. It makes the entire universe – which is already expanding – expand faster.

Brian, based at the Australian National University, found this unexpected expansion by looking at a specific type of exploding star called type 1a supernova. His team measured the distances of many of them. The younger and closer ones were where they were expected to be. But the older and more distant ones were not – they were fainter and further away. Conclusion? (Hey, it’s pretty obvious, isn’t it?) The expansion rate of the universe sped up about 5 billion years ago. This might be a complicated explanation. But, as a Nobel laureate once said, “If I could explain it to the average person, it wouldn’t have been worth a Nobel Prize.”

At this stage, we have no idea what practical use dark energy will have. But remember, it took about three quarters of a century from when Einstein came up with the theory of special relativity to when it appeared in the first GPS satellite navigation device.

It might take just as long for knowledge about dark energy to become an essential part of our daily lives.