Dr Karl takes a look at how the Bionic Ear – developed with the help of Australian expertise – helps nearly 300,000 people worldwide hear again. 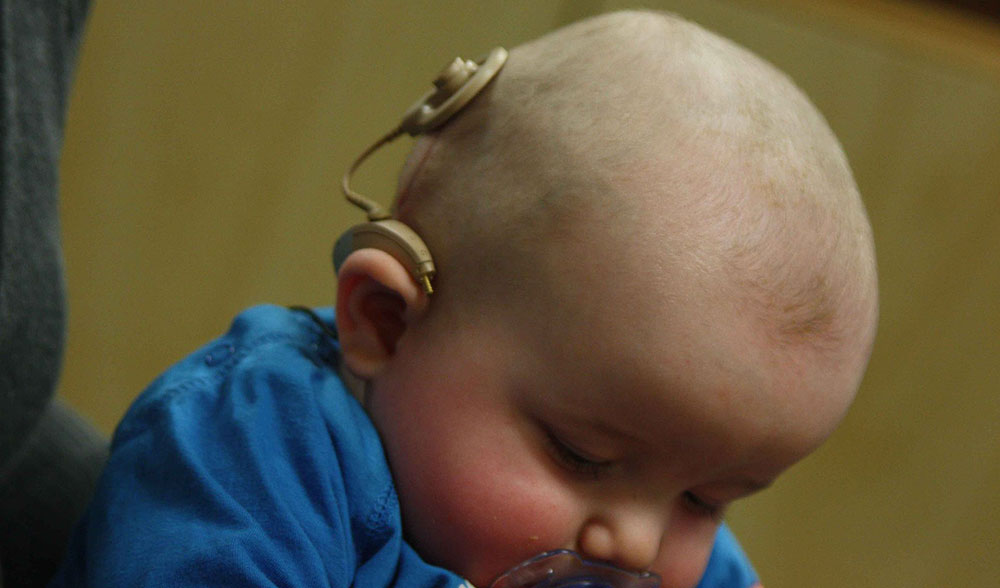 An infant with a cochlear implant. IMAGE CREDIT: Bjorn Knetsch/Wikipedia, CC BY 2.0

HEARING LOSS IS a major disability. People have been working on this for centuries. Beethoven was totally deaf and would clench a pencil between his teeth and press it against the top of his piano to feel the sound vibrations.

But today we have the Bionic Ear.

First, let’s look at the human ear. The outer ear catches incoming sound and directs it to the eardrum. When you are listening to the quietest sound you can hear, the eardrum vibrates back and forth by a distance equal to the width of a hydrogen atom. The eardrum then passes the sound energy to three small bones. The last of these pushes on a membrane in the cochlea (the inner ear). The membrane sends sound energy into the liquid inside the cochlea, which ends up bending some of its 16,000 hair cells. This generates electricity, which is then sent via the auditory nerve to the brain, which decodes it into what we perceive as sound.

The Bionic Ear, partly developed in Australia, bypasses most of this, and directly stimulates the hair cells. The Bionic Ear has three external parts, and two internal parts.

Externally, it has a microphone to pick up the sound. It also has a sound processor – which is tuned to detect and process human speech, split it into channels and send it to the third part, the transmitter. The transmitter sits behind the ear, and (a bit like an electric toothbrush charger) sends electricity to the receiver.

Inside the body, the receiver is tethered to the bone. It picks up the incoming signal through the skin, and sends it to the electrodes. Finally, this array of up to 22 electrodes is inserted into the cochlea, to directly stimulate the hair cells. However, 22 electrodes are far fewer than 16,000 hair cells – so there is a loss of quality. Even so, the modern cochlear implant is surprisingly good.

Four countries were involved in its development – Australia (under Professor Graeme Clark), Austria, the USA and France. Australia’s system is arguably the best. Today, nearly a third of a million people have cochlear implants.