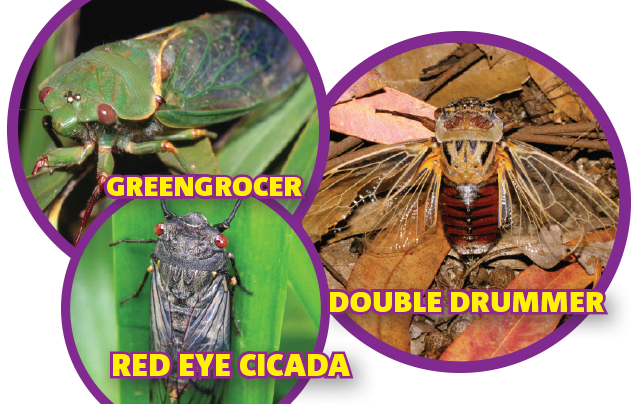 Have you ever heard the chorus of cicadas in summer? They can be very loud! This is because there are so many of them, singing together like a big insect choir!

Cicadas can be heard in most parts of the world. Each species has its own special distinctive song. The male make a chirping sound in the same way that a ‘wobble board’ does: they have a pair of special circular snapping plates on their abdomen, which they can ‘bend’ rapidly to produce a noise. They usually make a fairly low pitch – but some of the smaller species have songs so high-pitched they can’t be heard by human ears!

Sometimes, up to 10 trillion cicadas can suddenly pop up from their homes underground. A large number like this is called a ‘plague’. Over the few weeks that a plague lasts, the singing is very loud! The volume can get as high as it would at a rock concert – up to 120 decibels!

During a plague, the amount of cicada droppings could fill 300 Olympic-sized swimming pools every day! After they die, the plague of cicadas leave behind about 500 trillion eggs – about 1,000 times more than there are stars in the Milky Way! That’s a lot of baby cicadas ready for another summertime of singing!

Next time you’re out in the garden or a park, especially in the late afternoon, listen out for these clever little insects and you might just be lucky enough to hear them sing for you!

DID YOU KNOW?  Cicadas make three distinct noises. There’s the ‘disturbance squawk’ (when they are distressed, attacked or captured), the ‘courtship song’ (to attract females for mating) and the ‘congregational song’ (after permanently leaving their underground homes, which helps organise the arrival   of other cicadas above ground at around the same time).

DID YOU KNOW?  These amazing insects are sucking insects that pierce plants with their pointy mouthparts, and suck out the juices. They have two pairs of wings with visible veins, and five eyes!

DID YOU KNOW?  Cicadas spend most of their life underground – up to 17 years!

I had the best time at SupaNova Gold Coast. My out

I’m sooooo jealous of their clothes!

Why is space so big? How do plants grow? What’s