Dr Karl investigates the growing global trend of heat waves, which have killed more Australians than all other natural disasters combined.

MOST AUSTRALIANS remember that the Black Saturday bushfires in Victoria in 2009 killed 173 people. But the crippling heat wave that came alongside them killed more than twice that number: 374 people. The 2003 European heat wave killed 50,000–70,000 people, while the Russian heat wave of 2010 killed about 55,000.

It’s difficult to link specific deaths to a heat wave, however, because there are few clues that appear in an autopsy. Furthermore, your ability to tolerate heat depends on what temperatures you are used to, your age, health, fitness, and many other factors.

RELATED: The deadly perils of heatstroke

But morticians easily recognise heat-wave deaths in the morgue, when the bodies start to pile up. During the heat waves listed above and in Victoria again in 2014, there was simply no more room to store the bodies that were coming in. The overflow had to be stored in mortuaries, universities and funeral parlours.

Unfortunately, with climate change, the projections are that future heat waves will be more extreme in temperature, happen more frequently, last longer, and cover more of the Earth’s surface.

Back in the early 1960s, heat waves with temperatures three standard deviations above the average covered about 1 per cent of our planet’s land area. By 2010 they covered about 5 per cent. By 2020 it’s expected to rise to 10 per cent – and by 2040, 20 per cent. In other words, before the middle of this century, when heat waves do arise, they will cover about one-fifth of all of Earth’s land area.

In fact, heat waves have killed more Australians than all other natural disasters combined. At least 4500 Australians have died from heat waves since the year 1900. For the vulnerable at least, heat packs a powerful punch. 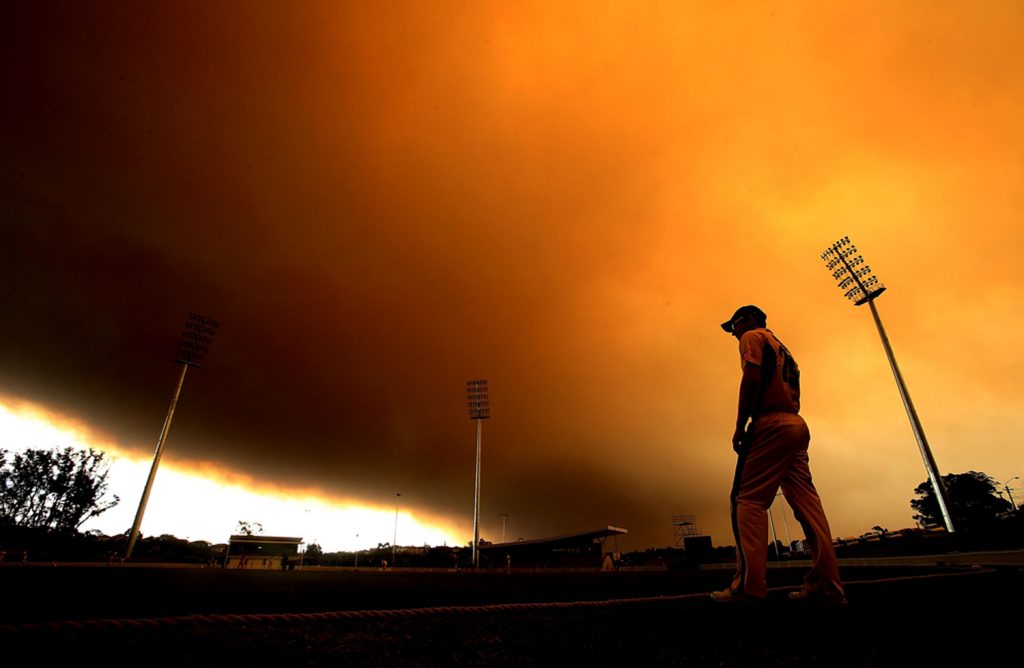 Cricketers play beneath the layer of smoke that covered Sydney in October 2013. IMAGE CREDIT: Getty images