There have always been myths about immortality, that is, being able to live forever. 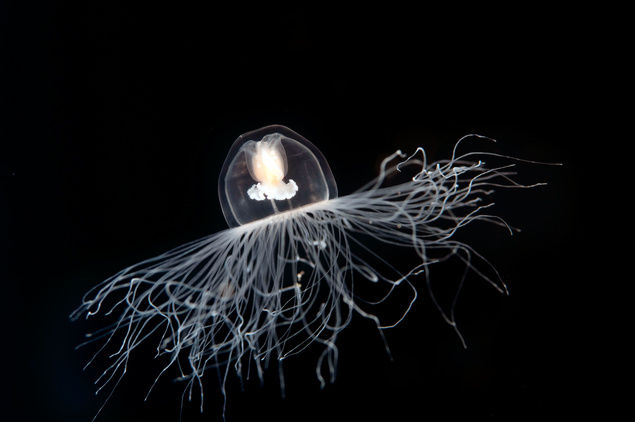 Well, our Marine Biologists have found a creature that comes close – a tiny transparent jellyfish.

After an adult male T. dohrnii squirts his sperm into the ocean waters, some of them end up inside a female T. dohrnii. This creates the fertilised eggs, which then turn into tiny free-swimming larvae called “planula”. After a while, the planula give up swimming and dive down to the sea floor and attach themselves to a rock. They then change shape entirely into columns of highly branched polyps. After a few days, another change of shape happens. Tiny jellyfish (about 1 mm across) “bud” off from the tips of the polyp and, like miniature asexual umbrellas with tentacles, float through the ocean. After 2-4 weeks, they become sexually mature males or females. They’re about 5 mm across, with a bright red stomach visible through their transparent body. They eat plankton, tiny molluscs, larvae and fish eggs.

CAN THEY LIVE FOREVER?

Now T. dohrnii jellyfish can be eaten by bigger creatures – so they are not truly immortal.

But when T. dohrnii suffers a physical attack, or starvation, or some kind of environmental stress, instead of dying, they change firstly into a tiny blob, and then back to the polyp stage within 3 days. They become another polyp colony sitting on a rock. The polyp is genetically identical to the original jellyfish – but is packaged differently.

Did that original jellyfish die? Not really.

Did that original jellyfish continue to live in the same body? No. It’s kind of like a butterfly that instead of dying changes back to a caterpillar – or an aged chicken turning back into an egg.

So technically it’s more like “Regeneration”, but it’s the closest that we have to immortality. And once we learn how T. dohrnii does it, we could apply this knowledge to medical science for humans.