The fate of our first submarine

Dr Karl tells the story of Australia’s first submarine in World War One, the AE2. 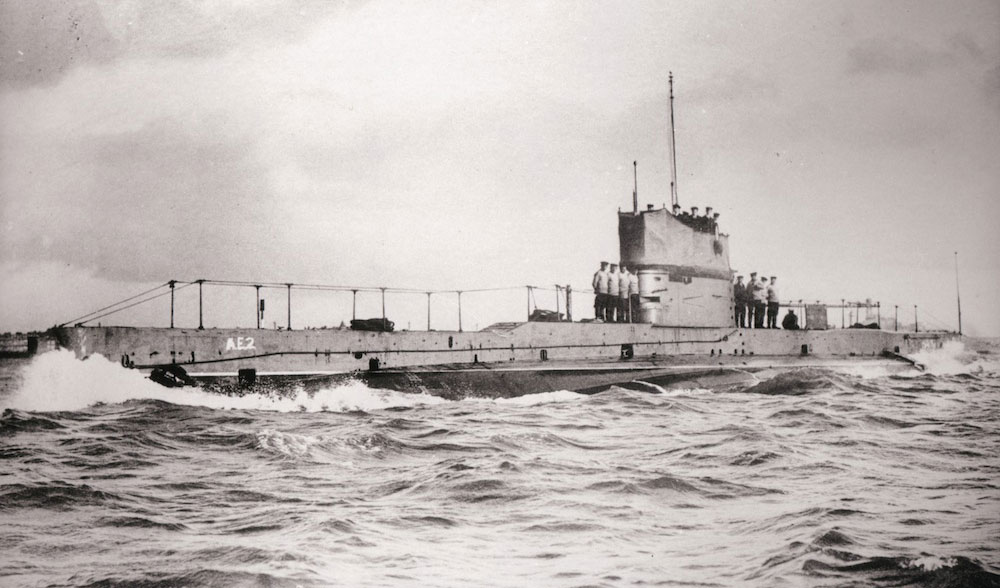 AE2 was built at Barrow-in-Furness, England, and arrived in Sydney in May 1914. IMAGE CREDIT: courtesy Royal Australian Navy

ON 31 DECEMBER, 1914, AE2 Australia’s only submarine (AE1 had been lost at sea off New Guinea two months earlier), sailed from Australia towards the Dardanelles. The plan was to trailblaze a path for the Allied fleet into the inland Sea of Marmara. Warships and other submarines had tried to transverse the Strait and failed.

The Dardanelles separates Europe from Asia – the Gallipoli Peninsula on the West, and Anatolia on the East. But it’s a truly hostile environment for a submarine. It’s some 60km long, only 1.2km–6km wide, with an average depth of just 55m. Its waters flow simultaneously in two directions – a surface current streams from the Sea of Marmara, but an undercurrent runs in the opposite direction.

AE2 sailed into the Dardanelles on the very first Anzac Day, 25 April 1915, at 2.30am, where it immediately engaged with the enemy. The sub was fired on by shore guns when it surfaced to start the diesel engines that powered generators to charge its electric batteries. AE2 dived to avoid the attack, but then went through a minefield for half an hour. Shortly afterwards, it was almost rammed by a Turkish destroyer, but still managed to fire off a bow torpedo to disable a small Turkish cruiser.

AE2 finally entered the inland Sea of Marmara at 9am on 26 April. At least half-a-dozen Turkish ships were diverted to deal with its approach.

The submarine’s end came all too soon on 30 April, as a result of a buoyancy problem. The sub erratically dove and surfaced, and a waiting Turkish torpedo boat fired upon it. AE2 sank just before 11am, in 55 fathoms of water about 8km off the coast. All of the 32 men aboard were captured and taken to prison camps.

Following this intrepid example, other Allied submarines entered the Sea of Marmara, sinking or damaging 148 sailing vessels, 44 steamers, 11 transports, five gunboats and a destroyer and a battleship. The Turkish forces then had to send reinforcements, supplies and ammunition to their troops on the Gallipoli Peninsula via the much slower overland route, rather than via the much quicker ferry across the Sea of Marmara. The valiant men of AE2 had showed it was possible to penetrate the Dardanelles.