Which way does water go down a drain?

Dr Karl investigates if water really drains anti-clockwise in the Northern Hemisphere and clockwise Down Under. 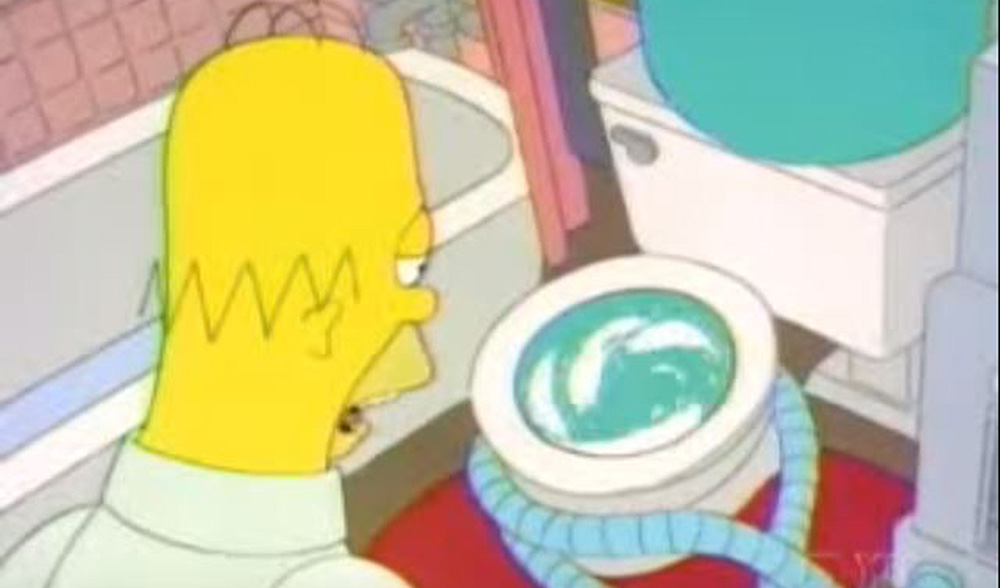 Which way does water go down the drown? IMAGE CREDIT: The Simpsons / 20th Century Fox Television

As a cyclone moves away from the equator, it spins clockwise in the Southern Hemisphere (and anti-clockwise in the Northern Hemisphere), a movement caused by the so-called Coriolis force. However, a cyclone can be hundreds of kilometres across, whereas an average toilet or hand basin is much smaller – only about 30cm across. The Coriolis force on such a small body of water is about 10 million times smaller than the gravity force of the Earth pulling on the water in the toilet or basin.

So, can you see such a small Coriolis force effect when the ‘gravity effect’ is so much bigger?

Yes – but only if you are extremely careful. The rotation effect of the Coriolis force is so small in the hand basin that it is vastly overshadowed by local effects – such as the direction from which the water entered the container, air effects over the surface, temperature, location of the drain, and so on.

In 1962 Professor Ascher H. Shapiro at the Massachusetts Institute of Technology (MIT) in the US set up the first experiment to test the Coriolis force on a small body of water. It was then repeated in 1965 by Dr Lloyd M. Trefethen at the University of Sydney.

Shapiro used a shallow round dish – 2m across and 150mm deep. The outlet hole was in the dead centre and about 9mm across. He added the water through a hose, covered it with a plastic sheet and let it sit for 24 hours, before releasing the stopper plug from below. The water took 20 minutes to drain out, with no visible rotation for the first 12-15 minutes. Then the water began to spin anti-clockwise – slowly at first, then gradually increasing to one rotation every four seconds by the end. The University of Sydney team used very similar equipment, and got consistent clockwise rotations.

I get a lovely Zen feeling, knowing that the spin patterns on each side of the equator are so nicely balanced.