Why Is It Dark at Night?

Night and dark with Dr Karl… 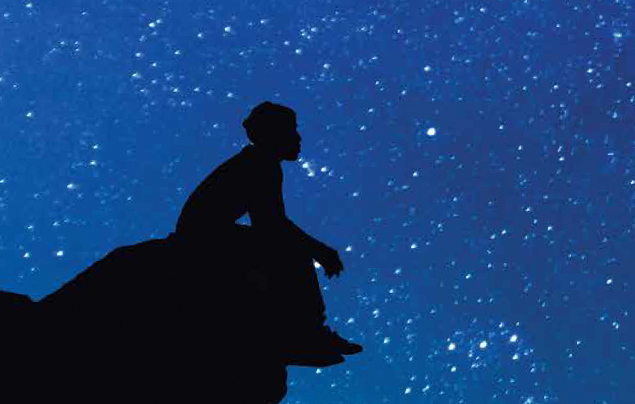 When there is no moon at night, the sky is dark – apart from the light of the stars (let’s ignore the planets). There are thousands of billions of billions of stars, and together they give out a lot of starlight. So why doesn’t the night sky glow as brightly as the Sun?

Let’s compare the sky to a forest. Imagine that each star is a tree, and that you are in a forest clearing, looking only horizontally (neither up nor down). Whichever direction you look, you always see a tree trunk. In the same way, with thousands of billions of billions of stars in the sky, wherever you look, you should always see a star – and so, the night sky should be really bright… but it isn’t!

1. The universe that we can see is not infinitely old, but only about 13.8 billion years old. So stars have been shining for only a while.

2. The universe is not infinitely large – the universe that we can see reaches out some 46 billion years.

3. Light takes time to get to us. For example, we see the Sun as it was eight minutes ago, the nearest night stars as they were four years ago, and the Andromeda galaxy as it was two million years ago, and so on. This means that the light from some more distant stars has not yet reached us.

4. Stars do not shine forever. Instead, they typically burn out after several billion years.

Back to the forest…Let’s finish off by going back to our clearing in the forest, where we imagine each star to be a tree. We are surrounded by an inner circle of fairly old trees.  Then, as we go outwards, around this inner circle are rings of progressively younger trees, and then a band of seedlings, and finally, a vast treeless plain.  So the trees (and the stars) have gaps between them – which is why the sky is dark at night.

The problem of day and night is not simple. It took us a couple of centuries to solve, and now we know why it is dark at night!

DID YOU KNOW? Stars come in many sizes. A neutron star can be 20-40km wide. Our sun is about 1.4 million kilometres in diameter, and    a red giant star (such as Betelgeuse) can be 1,000 times bigger than our sun!

DID YOU KNOW? A black hole has no size, yet it weighs millions of times more than our sun!

Put Dr Karl to the test! Ask him all your science

Tomorrow Dr Karl is going live on TiKTok to answer

Yes indeedy, book 46 is here with gnarly 'Mini Me'

Oktoberfest Breakfast of Champions - but why is Ok

Marrying the best of (Aussie Birthday) and (Aussie